Legends Parallel’s Kickstarter is Gearing Up.

First off, welcome friends of Brian Pitts, a/k/a Brian “Bigger Lion” Daniel, to our mailing list. You can opt out any time you wish but we hope you won’t. We have a lot of great stuff happening right now.

What do Comic Booked, Black Science Fiction Society, Pop Culture Review, Indie Comic, and others have in common? They all love Legends Parallel. Now that we’ve secured National print, and International digital, distribution through Nerdanatix we’re preparing to release more issues more often. That means setting up a production schedule and sticking to it. While Legends Parallel has been self-sustaining since its release, it has taken us about a year to release each issue when all was said and done.

Not that it’s been a problem. Legends Parallel has been a top 10 comic on Nerdanatix since January 1, 2017, and was recently the #1 comic overall.

It takes our artist, Leslie Tejlor, about 45 days to do a full comic. The more we can pay upfront the more issues he can crank out. Also, we’re building a graphic novel around the first three issues that will be made available to brick and mortar stores all over the country. Comic book stores prefer those over single issues since they have a better shelf life and are a better return on their investment.

All in all, we’re set to take the Legends Parallel multiverse to a whole new level. Please make sure to join us on April 1, 2019, when our Kickstarter goes live. We will have a wide range of rewards for backers, including rare autographed issues. Also, don’t forget to spread the word to your friends and families. You wouldn’t want anyone to miss out on this. 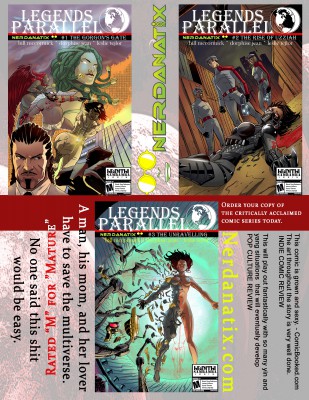