While this blog is festooned with links to free stuff it seems that it might be a touch easier for folks if I put them all in one place. So, here we go.

A Letter from An Editor – Winner of a 2013 Sci-Fi Editors’ Choice award. A young, mentally challenged, man receives a rejection letter and ends up spawning an interplanetary war.

Twerking for Jesus – She wanted to do something fun with her family. Instead she summoned Chtulhu. Features a mandatory appearance on the Ellen Show (not authorized by any breathing beings).

And The Beat Goes Phut – A DJ witnesses the apocalypse while sharing a drink with the terrorist who started it. The first story Bill ever had commercially published.

If Thou Art God – Tongei comes to Earth to be its god. That goes about as well as you’d expect.

While the real life story of Marcie is tragic, she killed herself after being sexually assaulted and bullied, her mother didn’t want that to be the final word. After a lengthy search we found Eko Prihanto to do the art. His brightly colored panels worked perfectly with the compelling story. Zak Weber, over in jolly old England, gave the resulting comic high marks.

SVAROZIC
Hadithi Sambamba Comix
Read for free online. A woman trapped inside a man, a god trapped inside a human. Part of the Independent Creators Connection (ICC) ring anthology. Each character, created by different artists, has an elemental force controlled by a ring. They will try to stay alive as a dark menace hunts them down and tries and steal their powers. Art by Ghoulbeanz.

World Building Tips  – A look at creating believable universes for your characters to inhabit. Bill was voted one of the Best World Builders by, the now defunct, Science Fantasy Hub.

Checking Egos at the Door  – A look at the phrase “Do you know who I am” as interpreted by someone who doesn’t give a fuck.

World News Center – The home of all Bill’s nonfiction writing about science, pop culture, and bizarre holiday traditions. It also provided the source material for his weekly appearances on The Big Wakeup Call with Ryan Gatenby on WBIG from 2010 to 2022.

Sci-Fi Comic Nexus – This London based blog / newsletter / video streamer is one of the world’s most popular destinations for learning about comics. It also can lead you down a deep science rabbit hole. Zak Webber, the congenial host, discovered Legends Parallel and has been a McSciFi fan ever since. This is a great interview.

Ionosphere Magazine (12/2022) – a magazine released through The National Fantasy Fan Foundation, which has been around since 1942, added me to their pantheon of science fiction writers they have promoted. This iteration of Ionosphere has been run by John Thiel since 2016. My interview here is more in depth and covers some ground you may not be familiar with. It was a lot of fun to do so I hope you’ll take a minute to give it a gander.

The Mightiest Nightiest Show – Media legend JoAnn Genette interviewed Bill and they played games like “who wore it better” and “name those boobs.” They also discussed the latest Spider-Man movie and what it’s like to create comics and novels.

Polite on Society – Marc Polite does a quick dive into Bill’s squishy brain.

People Globally – A fun jaunt through the tiny spaces in my mind.

Awesome Gang – A quick, but fun and informative, read about the latest goings on in the world of McSciFi.

Titles, Talk, and Tipples – A fun interview with author Jude Matulich-Hall. For the tipples part we both drank straight vodka. The link here is to out takes and some tipsy fun.

Books That Make You – a fun half hour with, the legendary, Desiree Duffy, as she and Bill discussed The Brittle Riders and all the cool weirdness that followed. There’s even a fun story about a young lady using this bizarre tome to learn English.

Some Like it Hot – A  full hour of politics, scifi, and a dive into the history of my sex life all hosted by Nakia Niteshade. Well, be honest, you wouldn’t listen if it was called Some Like it Beige.

Celebrating Chicago’s Local Lit Scene – A fun half hour romp on the amazing Bill Leff & Wendy Snyder Show on WGN Radio.  It covers everything from local lit to why Bill has an arrest warrant open in Russia.

The Protagonist Speaks – An interview with SPLICE letig us know how he came to be and what he plans to do next.

The Birth of Bill McSciFi – How a screw up at Amazon led to a nickname.

LocalLit – Author spotlight. This was the first time anything written about me appeared in print. The Joliet Herald became my favorite newspaper that day.

Zeedub Bezzies – Chaos, cooking, and Iranian lesbians. This one covers some ground.

Authors’ Interviews (Fiona McVie) – By far the most in-depth interview Bill’s done for print or blog.

Planet Scumm – I appeared in their debut issue, and later in their omnibus edition, with my story Korzac: Nördicon of Dern. There exists an audio version of that story, but I can’t find it any more.

Escape the Every Day (Cindy Tomamichael)

Sland, from The Brittle Riders,
interviewed by The Knights of the Science Fiction Roundtable

The ‘bleak’ quote is from a Catholic priest. It should give you an idea of what you’re getting into. 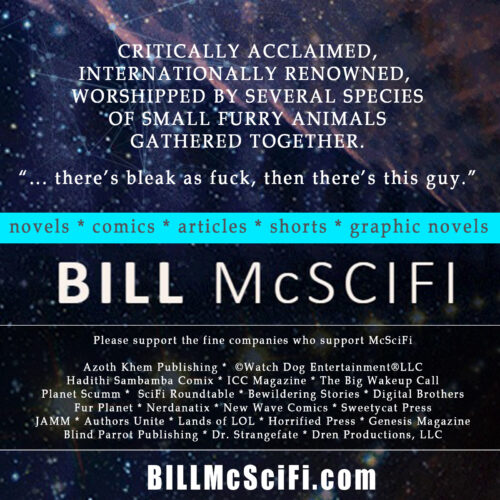