Hard Copies from a Squishy Brain

Good news super humans, and that’s all of you …. well, not you in the corner, you creep me out …. anyway, back on topic, you can now get Books I & II of The Brittle Riders delivered right to your home. Or the home of a sworn enemy. That’s up to you. You can get all three on Kindle now as well. But, and this is the fun part, if you have a hard copy, and you’re in Chicago, I will happily arrange to meet you and autograph your copies for free.

Of course you can buy me vodka if you want. I like vodka.

A, far future, Earth had already been visited by an alien race, called the Sominids, who came here for the express purpose of drinking and having sex with everyone they could. When one of their, infamous, parties resulted in the moon being cut in half, and killing everyone who happened to live there, they quietly left.

Their encounter with the Sominids taught the human race many things, primarily that faster than light travel didn’t exist. Denied the stars the human race began to dwindle in number and terminate any space programs.

A thousand years later a scientist named Edward Q. Rohta circumvented anti-AI laws, which had been on the books for millennia, by creating organic creatures to provide manual labor. Instead of dying after ten years, as promised in the company brochure, they would develop flu-like symptoms and go into hiding. Eventually, fed up with the mistreatment they suffered at the hands of humans, they rose up and killed every man, woman, and child on the planet.

This the story of what happens next.

The Brittle Riders, apocalypses are funny that way. 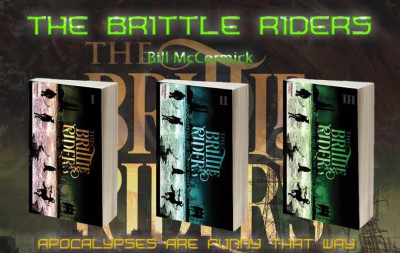