The Legends Parallel Kickstarter did not get fully funded. Which means no rewards were sent out, and the 4th issue didn’t get paid for that way.

Okay, that’s the bad news. Now for the good. People may not have wanted to fund our Kickstarter, but they did want the comics. Sales increased so dramatically that Issue #2 of Legends Parallel debuted at #2 on the weekly Nerdanatix sales chart. Issues #1 and #3 are still in the top 20. In fact, there’s never been a week, since January 2017, that there hasn’t been a Legends Parallel title in the top 10.

What they hated were the rewards. So, we’ll head back to the drawing board, happily entertain any suggestions you might have, and give this another shot later. Right now we have to concentrate on getting that issue out to the public anyway.

Also, the first three issues are being compiled into a graphic novel as I type and Nerdanatix has started adding dedicated stores, the brick and mortar kind, to carry it. And all their other titles too.

In other comic book news, you can read the character intros of Jungle Grrl and Svarozic for free just by clicking on their names. Both are in production to be full length releases later this year. Jungle Grrl is the fun story of a future fake Earth where public sex is okay but violence isn’t. So, naturally, all the action happens in an amusement park. It’ll all make sense when you read it. Svarozic is the story of a woman trapped inside a man and a god trapped inside a human. Since she’s all one person, she has some issues. Apropos of nothing, it’s set in a traveling gypsy circus.

In keeping with my carnival theme, you’ll be thrilled to note that The Space Clowns of Zoimba Prime will be coming out on Land of LOL, a feature on Science Fantasy Hub. Due to the fact it has naughty words, and uses nuclear weapons like toys, it will be in their new adult oriented section called Salacious Science. Even so, it’s funny as hell and will give you a new appreciation for clowns.

In non-circus related news, unless you count the side-show like atmosphere at Azoth Khem, the omnibus edition of The Brittle Riders is nearing release. The compendium of the entire trilogy cranks in at just under 1200 pages. Pre-orders from stores are already coming in so I’m guessing it will be used for more than a door stop. Also, the regular trilogy has been repackaged, and spiffed up mightily, for those people who might not want to make a lifetime commitment to reading one of my stories.

Until the omnibus comes out please allow me to tease you mercilessly with a peek at how cool it all is. 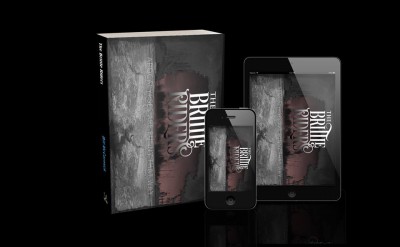