I just thought it might be fun to take a look back at the many iterations of me as I plunge forward into some cool stuff. First off, I’m thrilled poopless to announce that my collaboration with, Glyph Award nominee, Maku Tellez.is seeing the light of day. The short, called Ruh Roh Rangers, is an alternate universe look at four meddlesome kids who became four meddlesome adults. Click on the link to read it for free.

It’ll ruin your childhood and make your day. 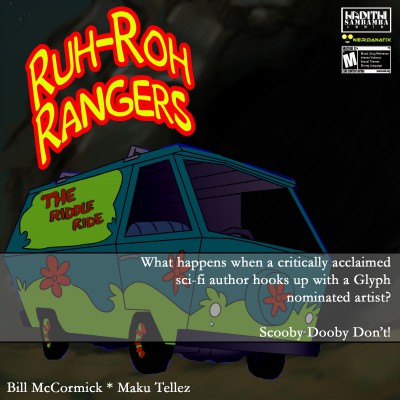 In other news, Hybrid Zero is chugging along nicely. As of right now there are three different universes that will, one day, cross. The first, Jungle Grrl, is out now and you can read it via the link. The second, Cassandra and the Changeling Sword, is well on its way to being on an internet near you and, the behemoth that inspired it all, Juggernaut, is completely scripted and in development. Basically, Cyril Brown, the creator of these universes, will be chained to a drawing table until Gabriel sounds the final trump. Which is fine with all of us.

You can join in the fun by subscribing to Cyril’s Patreon page. Subscribers will get access to his eye popping NSFW art long before anyone else. 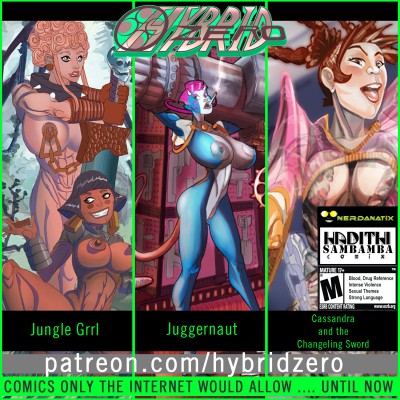 Last, but certainly not least, you can now buy McSciFi authored comics in stores, and the stores couldn’t be happier. The first one, Rocket Fizz in Houston, has added the entire Nerdanatix line. The cool part for McSciFi fans, and that includes you, is that I have three titles in the top 5 and you can enjoy a gourmet soda while you’re there. Seeing Legends Parallel #3 debut so high just reinforces the idea that we’re all doing something right.

You can check each of them out by clicking their links below.

Much more to come, but that’s enough for now. 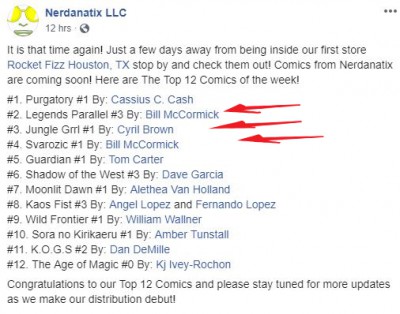