I hope everyone is riding this out as best they can. Here in Illinois the “shelter in place” order has been extended until May 31. And some companies that have been able to have people work from home look to continue to do so beyond that date, for all the right reasons. As I’m writing this there are over one million infected and fifty-six thousand, plus, dead. That’s a five percent lethality rate and that HAS to be taken seriously. Add in the fact that testing is spotty, at best, and supplies are short all over the country, and this is going to get worse before it gets better.

So, please, stay inside.

Now, on to the fun stuff. SPLICE has been offered the chance to be translated into French, German, Italian, and Spanish, at the moment. That’s great news, but means I have to conform the grammar to a standard translators use. And that’s where the fun begins.

The entire introductory section of the novel is a collection of faux hip hop lyrics, which are designed to be painful to read. Think HIPPITY HOPPITY TIL YOU DROPPITY kind of painful. Grammarly hates every single one. Also, Grammarly isn’t fond of informal speech. So, when I have a twelve year old homeless kid say “ain’t gonna do dat” Grammarly wishes it were “I am not interested in participating in this.” When I introduced a character known only as “old man” Grammarly suggested I consider something not as ageist and possibly gender neutral. Yeah …. no.

There are some placements of commas I can do to make it happy but, after that, it is what it is. SPLICE is an American book, steeped in urban patois, built around military jargon. None of which makes Grammarly pleased. And, since I speak a sprinkling of all the languages, I’m completely befuddled as to how anyone will make it work in them.

But all of the stuff Grammarly hates rocked the hell out of our beta readers. So, I’ll find a happy middle and move on. 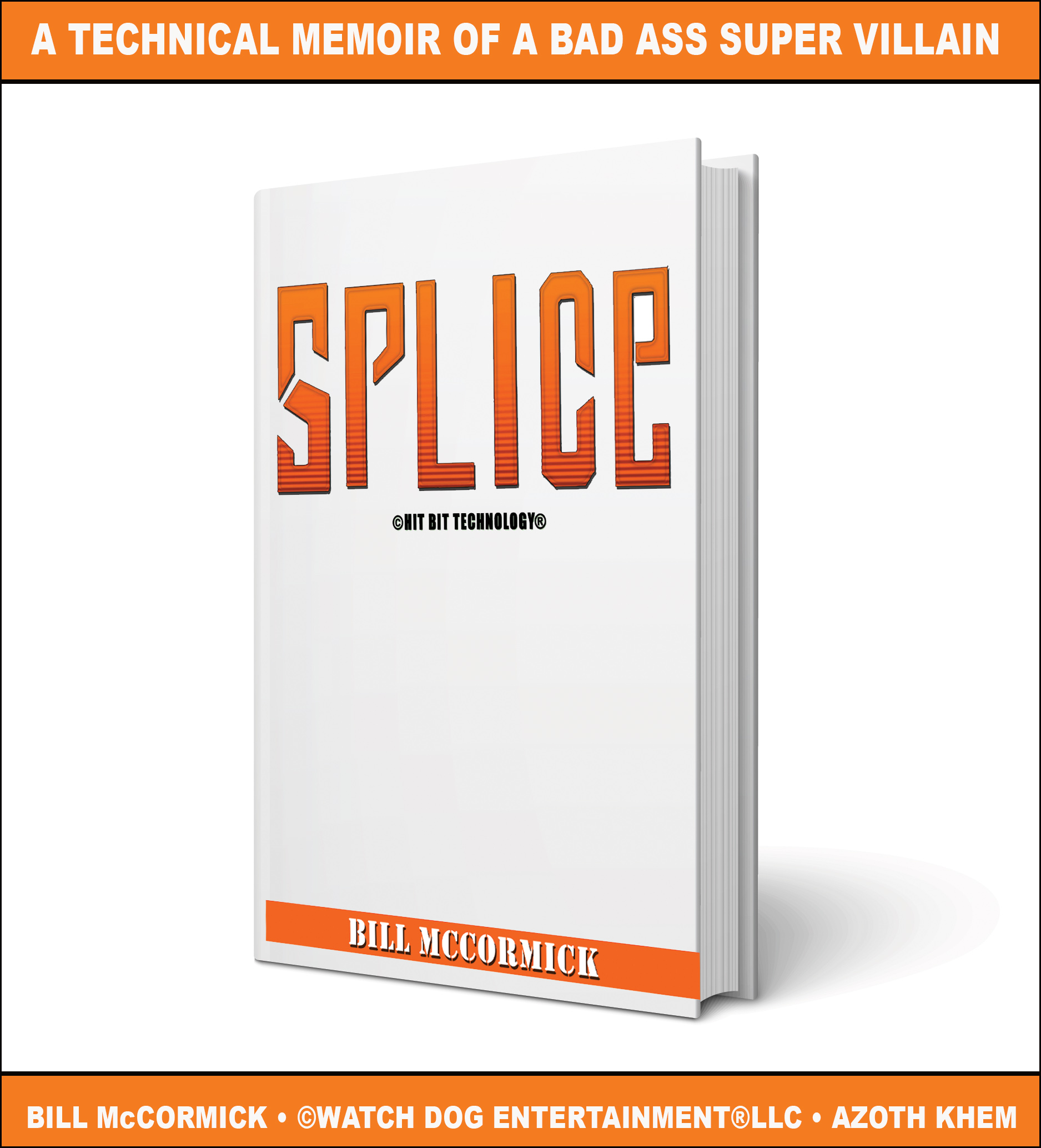 Last week marked the third time in my life that someone bought one of everything I had available, as far as my writing is concerned. Besides being amazingly honored I’m also humbled. To think someone read my stuff and said, “yep, gotta get me some mo o’ dat” (fuck you, Grammarly) is truly the kind of thing that makes this all worthwhile.

Now, that being said, I do need to clarify what can, and cannot, be purchased at the moment.

If you CLICK HERE you can order merchandise I have in stock. It’s all clearly defined online and ships next business day. The Legends Parallel graphic novel ships directly from the printer, but everything else is in my dining room. The last graphic novel I had in stock shipped to the nice lady who bought everything.

That being said, if you CLICK HERE you can order all the cool T-Shirts, onesies, coffee mugs, and so on you want (“desperately need,” I mean), but they won’t ship until Spreadshirt opens their factories. Those factories are located in Pittsburgh and Las Vegas.

My guess is Vegas will open first, but that’s just a guess at  this point.

Until then, here’s a great video of me holding stuff up and talking to myself, if you’re into that sort of thing. I made it for CyberCon. 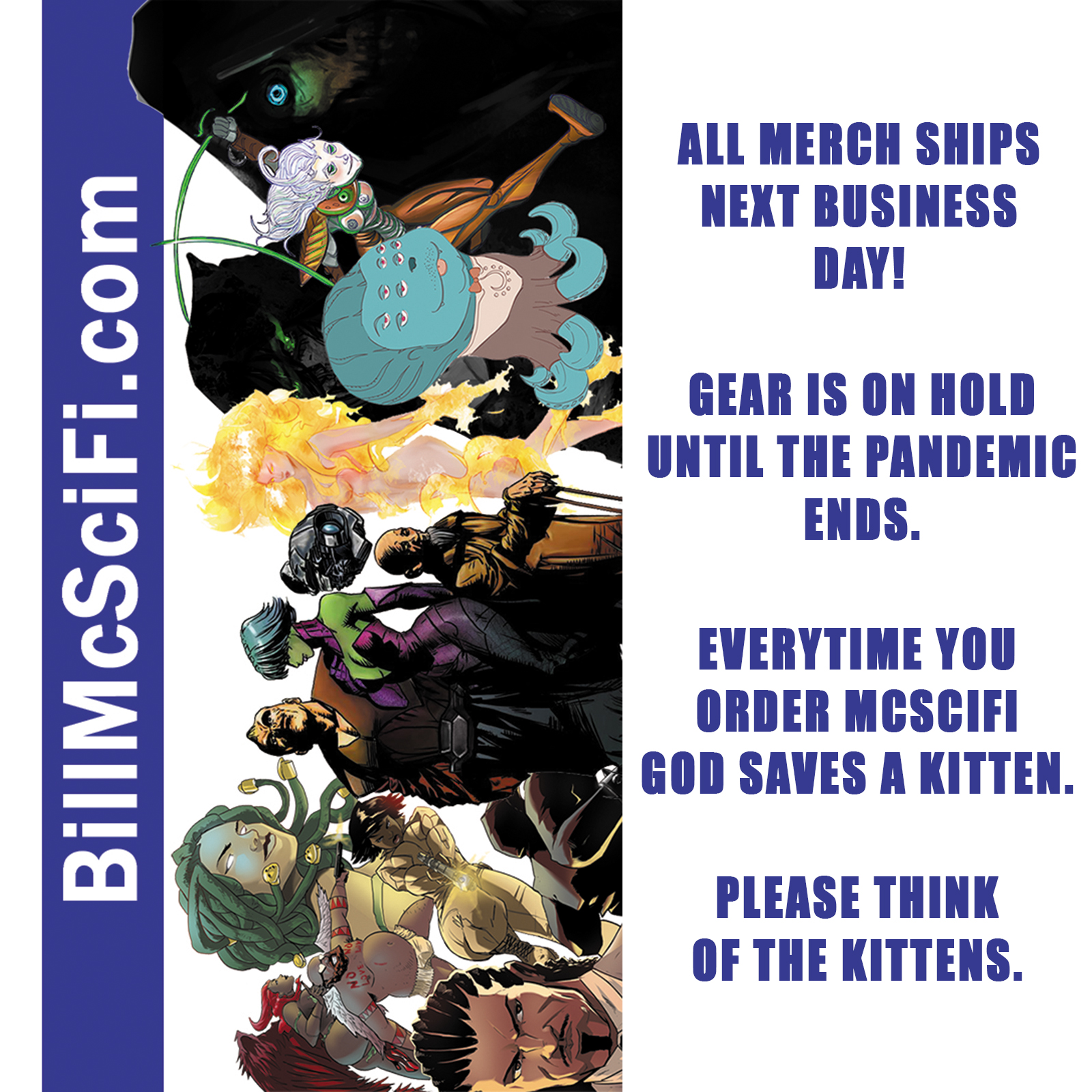 I have received some confusing emails concerning the Bill McSciFi Gift Card. So, to simplify, it’s a gift card. Just like the ones you buy at a store or order online to give as gifts. The only thing different is that, instead of saying Visa or MasterCard, it has my logo and images on it. That’s it. So, if you give someone a $20.00 McSciFi Card they can turn around and buy $20.00 worth of booze, porn, or religious trinkets. Literally, just like they could with any gift card. It’s backed by the people at Square, one of the largest online credit card companies in the world. It’s not something I knocked up in my living room while watching TV.

Hopefully that clears that up.

Lastly, I have been asked to join the gang over at the Sci-Fi Roundtable for a series of podcasts. All of which will focus on real science, uses thereof, and so on. I’ve already recorded one, which is being edited as I type, and am slated for three more. They’re fun, freewheeling, and informative. When release dates become available I will happily share.

Until next week here’s a pic of me and a pretty girl. Please, stay safe, sane, and inside.  See you soon. 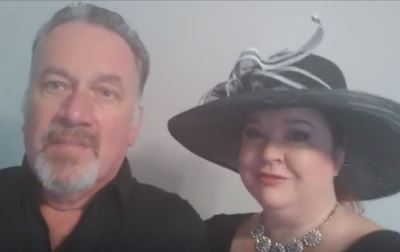